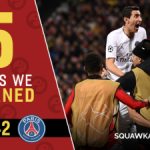 In a humbling night, Manchester United got taken apart by PSG at Old Trafford, losing 0-2. The French Champions came to Old Trafford and put in a quality display that was so assured. Despite the absences of Neymar and Edinson Cavani, PSG dominated the match and put United in a hole they will struggle to recover from – especially given Paul Pogba’s late red card. What did we … END_OF_DOCUMENT_TOKEN_TO_BE_REPLACED

Sign up to receive email updates and to hear whats going on with football in Ethiopia!