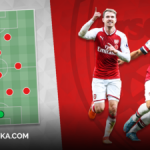 Arsenal have not been able to replicate their domestic dominance of the late 90s and early 00s in the past decade and a half, but that doesn’t mean they haven’t had good players. In fact, if Wenger had been able to keep all his players from the 00s and early part of this decade, he would have had a decent team, wouldn’t he? FA Cups notwithstanding, perhaps this team might have … END_OF_DOCUMENT_TOKEN_TO_BE_REPLACED

Sign up to receive email updates and to hear whats going on with football in Ethiopia!